Objective tinnitus, is a common form of tinnitus in which a doctor or a third party, in addition to the tinnitus sufferer, can hear the sounds that not caused externally. This means that the noises which are created within the sufferer’s own body and ears, often by circulatory issues (pulsatile tinnitus), and can be heard by others.

Objective tinnitus is relatively rare and can be caused by many disorders affecting either the circulatory system or muscles and other related medical items. Objective tinnitus can be mild, severe or somewhere in between.

Objective Tinnitus, Sounds All Can Hear 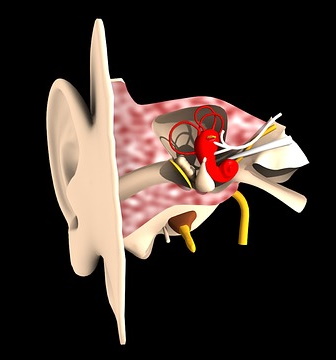 Objective tinnitus, just as its name suggests, is when there is a provable sound coming from a person’s ears, sounds that are not created outside the ear.

Objective tinnitus can be mild, severe or somewhere in between. Many people experience tinnitus while they are relaxing watching television, reading a book, engaging in conversation or while trying to sleep.

Others experience it most often after they are engaged in extremely noisy activities without adequate hearing protection.

Even those whose tinnitus came about because of loud noises can still find relief and may not even realize that it is objective tinnitus.

There are two main theories on what causes objective tinnitus, neither of which is completely proven. The first theory says that it is caused by somatic (musculoskeletal movement) or blood-flow issues.

Blood vessels in the ear may be too weak or too large for the cartilage to cushion. If they become too big, the noise that they produce is magnified , thus increasing the intensity. On the other hand, the theory that it is caused by a problem in the middle ear may not be entirely accurate.

The middle ear is simply an airtight tube. If for some reason, it becomes blocked, the noises will not be produced. So, although there is evidence that this occurs in a minority of cases, it cannot be proven. Blood flow within the ear tubes also has many other effects, including the possibility of creating noises due to blockages or blood flow reductions .

The good news with a diagnosis of objective tinnitus is that the sufferer may be able to have their tinnitus treated and possibly cured if the medical cause is identified and is a treatable condition. This is not usually the case with the other type of tinnitus, subjective tinnitus.

Other Types Of Tinnitus

Subjective tinnitus is different, and comprises the vast majorities of tinnitus cases. It has been seen that some people do hear sounds even when they are sitting alone, especially in a quiet room. These source of these sounds are not identifiable, and they can only be heard by the tinnitus sufferer, and no one else.

Somatic tinnitus can be caused by a muscular problem in the inner ear. There can be a fluid build-up or an infection, and sometimes both. This condition has many different causes, ranging from common colds to tumors or nerve damage in the neck area.

A common condition that causes noises in the ears is pulsatile tinnitus, which has a very wide range of causes. The most common cause is arterial problems which cause blood flow in the head and ear to contribute to whooshing noises heard by the tinnitus patient.

Patients with this type of tinnitus often have a pulsating sound in one or both ears. Other symptoms of this condition can include dizziness and a sensation that blood flow is not completely running through the body.

The ringing sounds heard by those with any type of tinnitus are a common condition and can affect a large portion of the population.

According to the Marshfield Clinic, “Tinnitus affects an estimated 32 percent of the U.S. population, according to National Center for Health Statistics studies. The prevalence of tinnitus increases to 70-85 percent in the hearing-impaired population. That indicates that more than 80 percent of the patients who have tinnitus also have some degree of hearing loss.“

If you are hearing noises in your ears, you are not alone. Essentially, around one-third of the citizens in the United states suffer with some type of tinnitus, and the vast majority of those people will see no cure for their condition. And, if you are hearing-impaired, you have an excellent chance of also having tinnitus.

The good news here is that, if you are one of these millions experiencing the screeching, ringing and whooshing sounds of tinnitus, there are ways to learn to live with your condition.