I’ve Been Hearing Tinnitus For A Number of Years…. 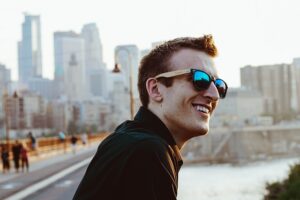 For many years, I’ve had a buzzing, whistling, screeching sound in my ears that I’ve never been able to totally get rid of. Those sounds are caused by tinnitus.

Along with the tinnitus has come a sensitivity to loud sounds and  levels of hearing loss.

For those who don’t have tinnitus (and you’re lucky, believe me), imagine hearing a continuous, high-pitched squealing sound all the time.

Sometime the sounds have a lower pitch. Sometimes they sound like birds chirping. The volume changes – sometimes louder and sometime softer. Sometimes I even forget I have tinnitus – until I think about it. Then the noises come back full force.

I also have hearing loss with my tinnitus, caused in part by a genetic condition.

These noises are called Tinnitus

Oh, sure – sometimes the sounds quiet down for a while (or so it seems). And I don’t have near the problem getting to sleep that I used to have. That’s before I learned some techniques that make it much easier to live with my tinnitus.

So, What Exactly Is Tinnitus?

Tinnitus causes an individual to hear sounds that do not have an external source. In other words, somewhere within the ear, sounds are sounds are created.

Only the sufferer is able to hear these sounds.

Most people at some point in their lives will have experienced a ringing sound in their ears after they were exposed to a loud sound or when they were in a very quiet environment without any outside noise. But, in healthy ears, these sounds generally go away after some time. No permanent damage occurs.

People who have this problem experience these sounds continuously. Either both or one ear might be affected by the condition, although it’s usually both ears. For me it seems like my left ear is the worst.

A high-pitched ringing is the most common sound that is experienced. That’s what I normally hear. Other people report that they hear clicking, whistling, hissing, roaring, or beeping sounds. I can sometimes hear birds chirping – or so I think.

But usually the noises are continuous and steady.

The symptoms often can be ignored in mild cases and they don’t usually have a major impact on a person’s daily life. However, in more severe cases, tinnitus can seriously impact the quality of life of the sufferer and make it very hard to function in a normal way.

Sleeping can be a challenge for those with severe noises.

Through years of research, testing and trying different ideas, herbal remedies and other techniques to help me get by, I have learned how to live a quality life, even though the sounds are almost always there.

What ultimately has worked for me?

Click here for some great home remedies for relief from my condition.

Unfortunately, what works for me won’t necessarily work for another sufferer.

You see, there is a physical and an emotional aspect to our tinnitus. Mostly, the physical part is very small compared to the emotional component – most medical doctors cannot find a single physical cause with most sufferers!  With no identifiable cause, treatments are limited!

It’s this lack of a clearly identifiable cause that makes our problem so difficult to treat. And, that’s why there are such a wide range of treatments – what works for one person doesn’t necessarily provide relief for another.

It is very hard to diagnose tinnitus’ underlying conditions and even more difficult to determine its exact cause. The sounds could be caused by negative side effects of certain medications like antibiotics or NSAIDs (NonSteroidal Anti-inflamatory Drugs.

Given that a majority of cases report that the sound is heard in their head, there are some experts who think that psychological conditions cause tinnitus, especially depression.

However, in rare situations where other people can also hear the sound and can be heard when a stethoscope is used, it might also indicate a serious medical condition like an aneurysm or the growth of a tumor inside a blood vessel.

It may be caused by an ear condition like an ear infection, ear canal blockage, or muscle contractions within the middle ear. Other potential causes include head injury, head trauma, hypothyroidism, hypertension (high blood pressure), and anemia.

Tinnitus can significantly affect a person’s quality of life. Regular activities, including simple actions like walking, can be very risky and severely limited due to the difficulties in cognitive ability and focusing that distracting noises bring on in people with a severe problem.

On a regular basis, these noises can cause lack of sleep, dizziness, headaches, and hopelessness at having to endure this annoying condition that does not appear to have a cure, and one that many doctors have no idea how to treat.

The personal, professional, and social relationships of an individual with tinnitus are limited as well since interacting with other individuals requires being able to clearly understand them and properly interpret nuances in interpersonal and verbal communications.

Tinnitus can severely narrow down career choices, since critical professional skills, like being able to follow instructions, communicate with others and focus can be impacted by auditory distractions that tinnitus causes. Workplace possibilities like occupations in hazardous environments, machinery operations, and the fields of infrastructure and construction may be off-limits to these people.

How To Manage Tinnitus

There are surgeries, medications, and procedures that doctors might recommend, if a cause for your tinnitus is discovered. However, often these symptoms are the focus and not the treatment of the the actual condition.

Temporary relief is often achieved by drowning the grating noises out with sounds that are more pleasant, such as music.

Masking the noise that tinnitus causes can sometimes be done by having the individual wear a hearing aid that emits soothing acoustics, sounds of water, or pleasant background music. There are some drugs that provide short-term relief or offer solutions for aspects of tinnitus, like relieving headaches and dizziness or reducing noise volume.

For very intense noise, surgery may be performed, although there are no guarantees that it will be successful. There are only a limited number of medical centers and specialists with the proficiency to conduct this type of treatment.

For many cases, learning to live with the constant noises (and the hearing problems that often accompany tinnitus) may be the best we can hope for.

The good news – there are is a lot more hope for treatment than there were just a decade ago.

It is said that approaching tinnitus with holistic methods can help individuals boost their health, manage their daily activities, and improve quality of life.

Hypnosis, biofeedback training, yoga, acupuncture, and meditation can also induce relaxation and relieve the tensions and stress that the noise causes, and make them appear to subside eventually.

The wellness combination of regular exercise, getting enough sleep and eating well are also strongly recommended, not only for easing tinnitus but also potentially fighting the medical conditions causing it.

Author’s note: My tinnitus always seems worse during the day after a poor night’s sleep. The better sleep I get, the better able I am able to deal with my tinnitus.

Once you clearly understand what tinnitus is and its effects and causes, you will be able to make informed decisions on how to best treat this problem.

I encourage all visitors to Hearing Tinnitus to read as much as possible on the subject of tinnitus, in order to get a better understanding of what will work to alleviate their noises. Please beware of anyone who touts a “cure” – unless a physical cause can be found and treated, there is no cure for tinnitus.

Is there relief from the noises? You bet – don’t ever give up hope.