Do You Have Tinnitus?

Tinnitus is an unexplained screeching whooshing ringing noise in your ears that never really seems to go away. Sometimes tinnitus is accompanied by hearing loss. If you think you have tinnitus you may want to read on.

Did You Know There Are Four Different Types Of Tinnitus? 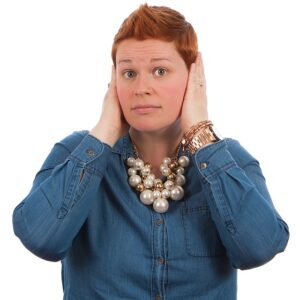 This is the most common type of tinnitus. The symptoms can be heard by the individual when he or she is exposed to excessive noise. It can appear and disappear quickly and could last between 3 to 12 months at a time. There are some cases where the noises never stop.

This condition is caused by a disorder named Meniere’s disease – which affects the auditory functions of the brain.

The condition affects the sensory system of the person. It could be generated by muscle spasms in the ear or neck.

This is a rare form of tinnitus that is caused by involuntary muscle contractions and vascular deformities. The condition will heal completely when the cause is treated. In fact, objective tinnitus is the only type that has the potential for a permanent fix.

This type of tinnitus is also known as auditory imagery or musical hallucinations and is less common. Simple or layers of musical tones will come together to recreate a composition or melody. This condition occurs in individuals who have suffered from tinnitus and hearing loss for some time. But individuals with usual hearing or increased sensitivity to sound can also be affected by this condition.

This is considered the most confusing type of tinnitus since the sufferer isn’t sure whether the sound comes from inside or outside. The sounds may correspond to the lowest octaves on a piano and similar to rumbling, murmuring, or humming. This type of noise seems to strongly affect most sufferers.

Tinnitus can be managed with numerous strategies. In fact, no single strategy will work for every sufferer. On the other hand, there isn’t an FDA-approved treatment plan for this condition. Sound-generating devices and behavioral strategies offer the best treatment results for this condition. In fact, distracting the sufferer’s attention from the sound can prevent chronic manifestations. Here are some of the most effective methods of tinnitus management:

There are many treatment options out there. But the effectiveness of the method may depend on the type of tinnitus.

Over 50% of tinnitus sufferers have an inner ear hearing impairment. There is a connection between hearing loss and tinnitus. Wearing hearing aids may ease the condition since the device amplifies outside sounds and make inside sounds less frequent.

Careful diagnosis by a professional is essential to create an effective treatment plan.

What can you do for your tinnitus?

Well the first thing you do is you see your family doctor just to make sure that it’s not the first variety (treatable) and if it is he or she can treat it and cure it and you’re good. But if it’s the second type then you move on to treating the symptoms as best you can.

Now there are some heavy-duty drugs that you can take that it can be prescribed by your physician to treat the symptoms of tinnitus although a lot of people don’t want to be dependent on drugs for this. They’d like to treat it in a little more natural way.

There’s a lot of information out there as far as nutrition and nutritional substitutes that help to treat the tinnitus now those are only effective if you have a nutritional deficit in your diet so usually they don’t work unless you’ve got some real medical problems to start with.

I can tell you six different techniques or six different ways that you can relieve your tinnitus and some of those ways that worked for me.  I’ve had tinnitus for probably 20 years and I’ve learned a few techniques that have made it easier to live with not cured not gone away but easier to live with. Now tinnitus is definitely treatable so you need to make sure that you get some information get some knowledge and get going and get some help for your tinnitus

Also, if you want more information about your tinnitus – here’s a short, informative article for you here.

I’ve also been busy reviewing Tinnitus Books – tons of information here! And a money-bask guarantee no matter what! Absolutely no risk to you – read my reviews here.